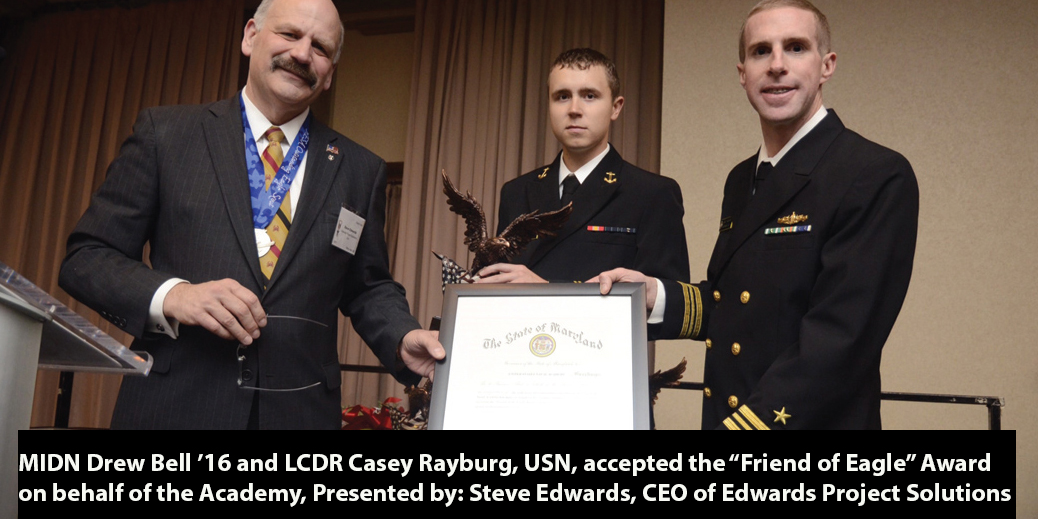 Midshipman Drew Bell ’16 and Lieutenant Commander Casey Rayburg, USN, junior permanent military professor in the math department, accepted the Baltimore Area Council Boy Scouts of America “Friend of Eagle” Award on behalf of the Naval Academy. Steve Edwards, CEO of Edwards Performance Solutions (who also chaired the event), presented the award October 29, 2015 in front of nearly 400 civic, business, and Boy Scout leaders from across Maryland. Traditionally given to an individual who has made extraordinary contributions to the ideals of Scouting and the programs guiding young Scouts along the path of Eagle, the Naval Academy was honored with the award this year for the exceptional contributions it has made to Scouting worldwide.

Home to one of the country’s largest National Eagle Scout Association (NESA) chapters, the Naval Academy supports a year-round calendar of mentoring, community service, and Boy Scout development programs. In 2015, the Academy hosted the Naval Academy NESA Science Technology Engineering and Mathematics Jamboree, during which dozens of midshipmen donated their time and talent to share STEM-related merit badge information with hundreds of Scouts from across the state of Maryland and its immediate neighbors.