On a recent vacation, I was struck by the most capable organization behind the scenes.

While it was not supposed to be obvious, the results were impressive, and there is something to be learned from this often unsung Project Manager responsibility.

The scenario could apply to most projects, but it took a different perspective to make it apparent to me. Ten acquaintances, mostly from the U.S., went as tourists to Tanzania to climb the world’s highest free standing mountain and Africa’s highest point: Kilimanjaro, 19,341 feet high. That is higher than placing Denver CO on top of the fourteeners! We hiked for a total of 45 miles, with permanent snow at 16,000 feet and above.

We had a fabulous team of Tanzanian guides and porters – 45 helpers, which seemed like a lot until we realized the efforts needed to ensure a safe and enjoyable trip. Their process was fascinating. To organize fair loads, each porter carried 44lbs, with something as light as a pineapple being added or subtracted to even the distribution.

Once we started our ascent, it became apparent there were fewer than 45 people with us each day. Rather than the contoured trails we used, we noticed unmarked paths going straight down the mountain. And, that was the clue!

Our chief guide, really our ‘Project Manager,’ orchestrated intricate, behind the scenes, supply lines up the mountain for us and to each successive camp site. Every detail was noted. Despite the harsh environment, preferences for particular food or equipment necessities were supplied in good time. At least half the porters were spread over the mountain, while the others made camp and fetched water.

Communications could not have been easy and even ones thinking at that altitude was a bit woolly. A few spots provided a cell phone signal, but they were few and far between and not very reliable. The entire team developed a system for identifying gaps, predicting what was needed, and when.

They also collaborated with guides and porters from other companies. On the way down the mountain, one member of our group was separated. But, the porters, on their way up with another group, quickly assessed the situation and relayed the information to our guide, who was able to send someone to accompany the lonely tourist. 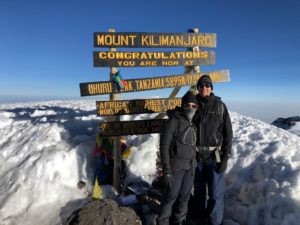 Overall, a system, effective training, and superb communications contributed to a great trip! And, yes, we did all summit. Our Tanzanian guides were wonderful and deserve full recognition for their excellent project management skills!